0
Your cart is currently empty.

Will you make the game in other languages too?

After our Kickstarter campaign that kicked off on February 8th, we are now finally ready to bring Superclub to Europe 🇩🇪🇪🇸🇮🇹🇫🇷🇵🇹. Pledge your support on an opening day to get the brilliant rewards at the lowest price. Follow the campaign here.

If you want the game in other languages, make your voice heard by voting in our Next language poll. To move your language ahead in the queue, make your friends vote (only one vote per email counts).

What happens when you play a draw in Supercup?

It's all decided in a penalty shootout. Select five players to take a penalty. The better the player, the higher his chances are to score:

The Superclub opponent doesn’t have individual players, but having made it all the way to the final, we can assume that they’re high quality. So all of them are 5 stars to start with, meaning that everything other than a 1 roll would be a goal for them.

Start the penalty shoot-out by having the opponent roll one die to see the result of the first penalty. Then it’s your turn to put your first player forward and roll (if it is a 6-star player, just take the goal).

Continue like this until you have rolled five times each, or until it is mathematically impossible for one to catch up to the other.

In case of a draw after five penalties each, it’s time for sudden death where the opponent’s ability drops to 4 stars and you take one penalty each until there is a winner. All 11 players must take a penalty before any player can take his second penalty. After 11 penalties, if it for some reason goes that far, the opponent’s ability rises back to 5 stars for the next five penalties.

How do Key staff members work?

Do you ship Internationally?

Yes. All shipments originate in Europe, so shipping time and cost will increase with distance. Outside the EU, UK, or Norway, import taxes may apply. Please consult your specific country’s rules and regulations regarding import from the EU.

Do you write these reviews yourself or is the game really that good?

It is that good! (This one we wrote ourselves). Read all reviews here.

Do you have any plans for further expansions?

Yes, Superclub will continue to grow. Sign up for our newsletter to get notified when something new is happening!

I have a business proposition for Superclub, who do I contact?

How exciting! Please send an email to opportunities@superclubgame.com

Where can I buy Superclub?

For now, this website is the only place in the World where you can get your hands on Superclub. Subscribe to our newsletter and get the latest Superclub news first AND a 10 % discount on your next purchase (excluding official licensed club expansions) 😃

How to place the cards in the tray

This is our suggested way to place cards, game pieces, bills and club pads in the tray. Your manager folders, game board, draft board and rulebook can be placed on top of the cards. Happy unboxing, boss! 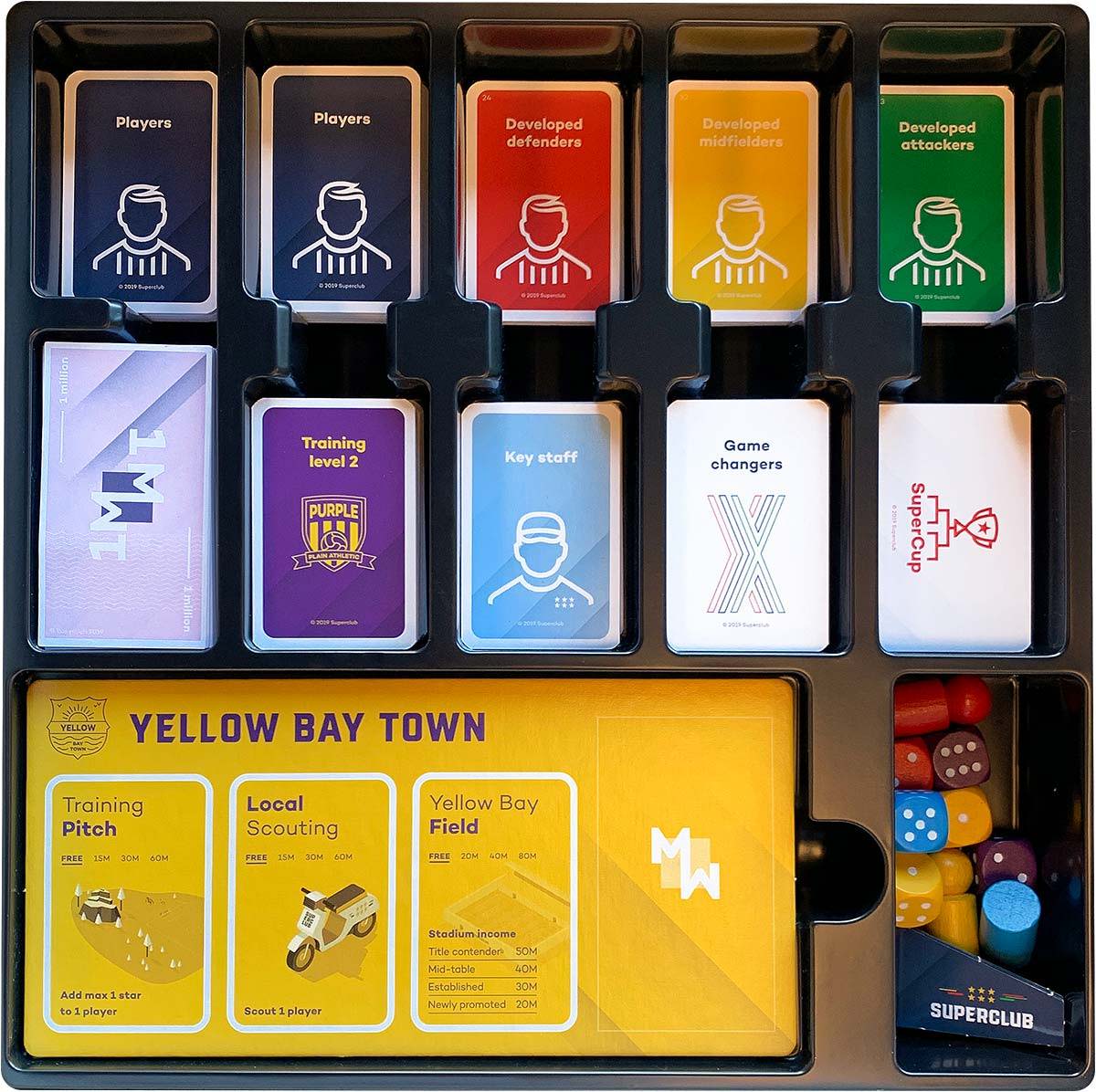 Learn how to play Superclub

You’re the newly appointed manager of a top flight football club. A decent club, not a great one. Certainly not a Superclub, although becoming one is the objective. The question is: Can you manage? 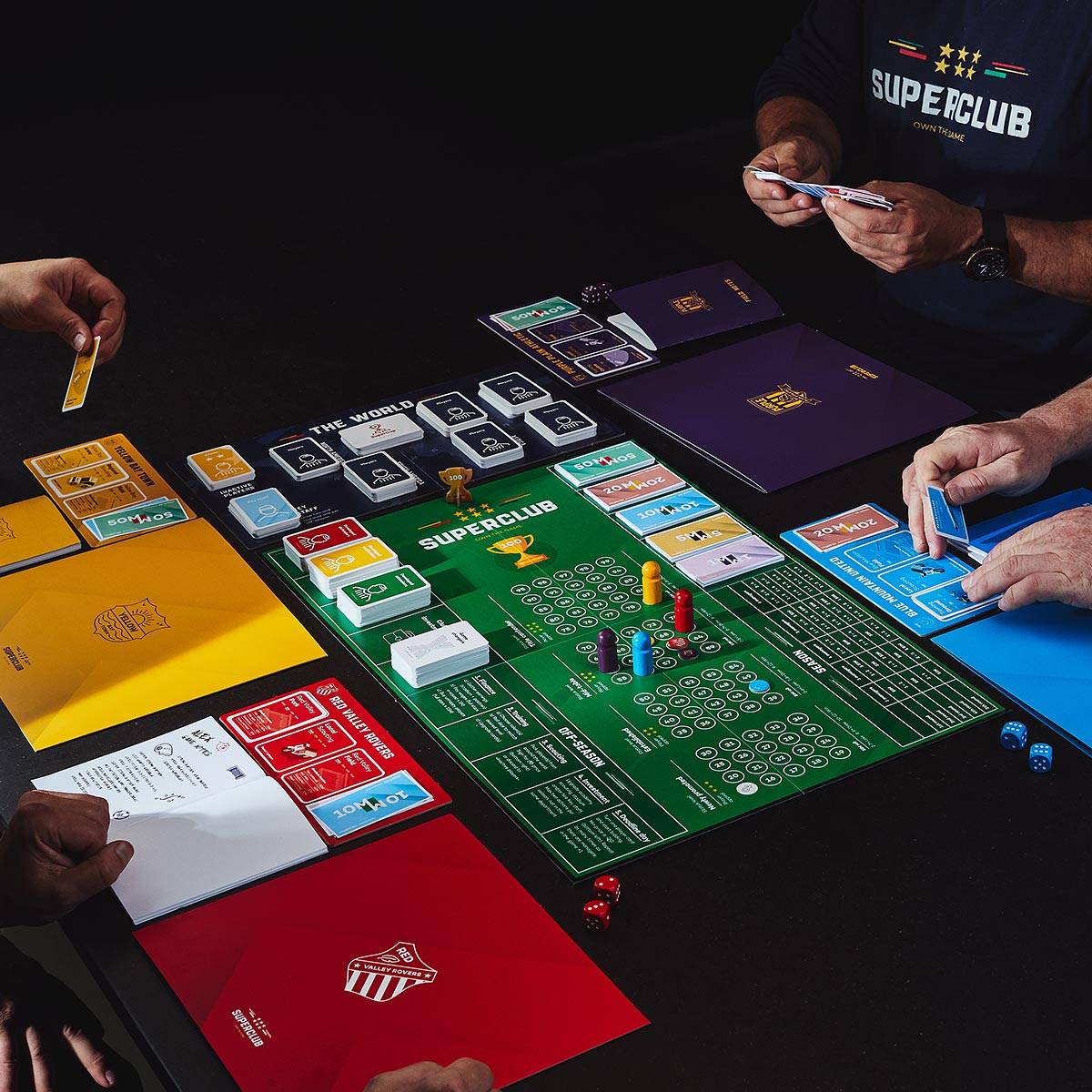 We’re so sure you’ll love the game, that we offer a 30 days money-back guarantee.

Superclub will arrive in 100% condition. We ship from the EU to anywhere – safely and quickly with tracking. Tolls and customs might apply.

Your personal data is 100% safe with us. We’ll never share it with any third party or misuse it in any way.